The past week has really flown by. It seems only days ago that we were all returning from our first round of trips... wait, that's because we were. Since then, we've had the Gong Show, Klondike Day, Casino Night, and plan to have the Camper-Counselor Hunt later tonight. To a camper, all of these evening programs are familiar, but they are likely not for our blog readers. Fortunately, I'm here to explain and interpret all these crazy programs for parents, camp families, and alums. 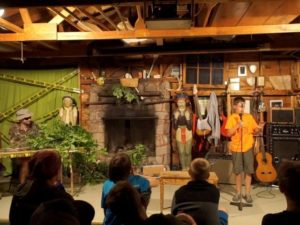 Let's start with the Gong Show. Essentially a talent show, what makes the Gong Show unique is the "no talent is enough talent" nature of it. As is the goal with all of our evening programs, we get kids on stage and channel their creativity throughout the night to produce some of the best home-made entertainment in town. Campers performed individual or group skits, demonstrating skills ranging from world-class yo-yo tricks, to putting on 9 belts simultaneously. The skits are allowed to continue until the hosts of the Gong Show "gong" them off the stage. 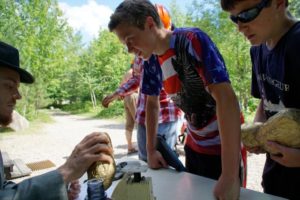 Then we had Klondike Day. Campers were told that afternoon that due to some vague legal issues, gold prospectors that had rights to mine the Camp Voyageur peninsula had to share their mining rights with campers. Gold was hidden throughout the peninsula (rocks painted gold, most likely), and campers could find it and bring it to a local banker for deposit. Having an absolute monopoly, the banker would often undercut campers, claiming their gold was "fool's gold" and giving them little to no credit for their deposits. As if there wasn't enough trouble for campers already, upon hearing about this great gold-finding frenzy, local thieves became involved. Many campers were stopped and forced to pay off the thieves, who would encounter them using the trails around camp. 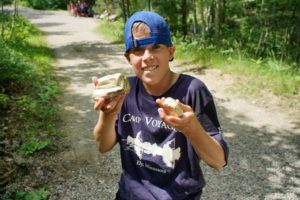 With all the newfound wealth on the camp peninsula, a casino decided to open up for business in the Mess Hall. While the banker was supposed to distribute everyone's deposits from Klondike day, due to some "accounting errors," the actual values for each camper's account had been lost, and the banker was nowhere to be found. The bank quickly decided to pay off the campers before any legal battles ensued, and everyone received the same amount of cash at the door of the casino that night. Black jack, 5-hand poker, craps, checkers, chess, arm wrestling, and Texas Holdem were just a few of the games played that night. As any responsible teenager would, most of our campers spent their earnings on snacks and drinks at the saloon. Others would gamble it all to try and get the most casino money by the end of the night. The end result? All of the hard-earned money of the campers seemed to vanish in a single night. Perhaps some of them learned that investing in a Roth IRA... okay, I'll be more realistic. Perhaps some of them will be more risk averse with their money in the future!? 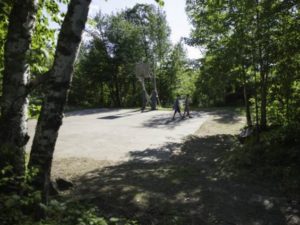 The final evening program before the next round of trips is of course the Camper-Counselor Hunt. As its name implies, counselors will be searching for campers, but what is not intuitive are the rules. Campers have 5 minutes to hide, and counselors get 10 minutes to search for them. Each round, the camper that successfully hid closest to the basketball court wins. What do they win exactly? Perhaps candy, or perhaps some really delicious nectarines. We haven't decided yet, but more likely than not, everyone will be eating nectarines in the near future. We have a lot of them.

So in the span of only a few days, the second round of trips head out. These trips will vary in length, from several 7 day Boundary Waters trips to the 10 day Quetico expedition. While many of our groups will depart camp on different days, they will all return on the same day: Tuesday, the 5th of July.

You can expect there to be a significant gap in content (photos, videos, blogs) until then, since I'll be on the trail.


However, as soon as it is possible, I will be uploading the photos from each of these trips which I expect to be some of the best we've ever taken. Counselors and their campers, having shared their photos with one another after their first round of trips, are excited to document their adventures and bring them home. Of course, as with any wilderness adventure, it's easy to focus on the moment and simply enjoy the wilderness around them rather than worry about taking so many photos and videos. We aim to find a healthy balance between the two.


So check back in sometime on the 6th of July. Happy fourth of July, and I hope to see many of you at the Session 1 Banquet on the 8th! RSVP for the banquet on our Facebook page, or RSVP with Deb by email at cvspirit@campvoyageur.com.


Some additional info about the Session 1 Banquet on July 8th:

Parents, camp families, and alums are invited to the Session 1 banquet! Starting at 2:00 PM CT, you're invited to the Camp Voyageur peninsula. See the kids in action as they race through the obstacle course, perform on stage, and hang with friends from their summer adventures.

At approximately 5:30 PM, dinner will be held in the Mess Hall serviced by the staff. After dinner, a brief show featuring some of the star events from the WELK Radio evening program will take place. The Voyageur staff will introduce themselves, and then hand it over to camp director John Erdmann who will close the banquet with a few announcements and acknowledgements.

After dinner, you may tour the peninsula until campers have their closing ceremony at the Fire Circle at approximately 8:00 PM. You may pick your child up the following morning after that.