The State of the War Canoe Address

Camp Voyageur’s trademark boat, the War Canoe, will be spending this 2015 summer season off the water. The unique eight-man, bright yellow, and fast-moving canoe has been turning the heads of Northern Minnesota’s paddlers for over 25 years. Originally manufactured by Old Town in the 1960’s, the Camp Voyageur War Canoe has been a symbol and tradition since its arrival on the camp peninsula in 1968. It was originally built for the U.S. Naval Academy at the William & Mary College in Indianapolis in 1962. 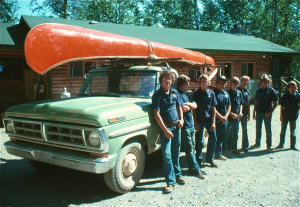 The war canoe was bought (used) in 1968. It was originally painted orange.

Camp Voyageur staff will now spend the 2015 summer ensuring its legacy lives on for many years to come. Nine-year camper and current counselor Elliott Keller leads the effort, along with six-year camper and current counselor Will Kunz. Over the course of the summer, the two will pair up to address numerous leaks with new woodwork and canvas to give the boat a fresh look.

It was just last summer that the CV War Canoe was cruising along the shores of Basswood, Knife, and Saganaga Lakes. The boat offers campers a unique experience with its undeniable resemblance to the boats of the original Voyageurs that once paddled some of the very same lakes.

Similar to the camper experience in many ways, the original Voyageurs packed up and left their lives at home, traveling thousands of miles into the interior of the present day wilderness, the Superior National Forest. They overcame vast challenges, building a small, cordial community along the voyage in one of the most expansive and untouched wildernesses in the entire world, both 200+ years ago and today.

Whether there is a War Canoe on the water this summer or not, nothing can change the Voyageur’s spirit from being apart of the Camp Voyageur experience and propelling campers across all the wondrous beauty of the Great Northwoods!