Last June Voyageurs mounted their own 1100-mile expedition from the camp bay to Hudson Bay via the Albany River.

After taking a year off from camp, Charlie Steiner, Peter Grunawalt and Elliott Keller bring their Hudson Bay badges back to CV. In the ‘70s Elliott’s father Paul Keller and other Voyageurs followed the 1964 CV Albany River route to the bay blazed by Bob Thum, Carl Thum, Tom Bose and Buckey Walters. Here is an excert from Charlie, Peter and Elliott’s 2014 Hudson Bay Expedition blog:

“We are four friends who paddled from Ely, Minnesota to James Bay, Hudson Bay (the Arctic Ocean). It took roughly 42 days to make it to the bay (canoeing), and then back (via plane and automobile). We went over 1100 miles, with 610 of those miles being on the Albany River, which drains into the bay directly. All of us were grateful for the opportunity to make this trip.”

We look forward to welcoming Charlie and Peter back this summer as part of staff. Their experience will surely be of use at a wilderness adventure camp! 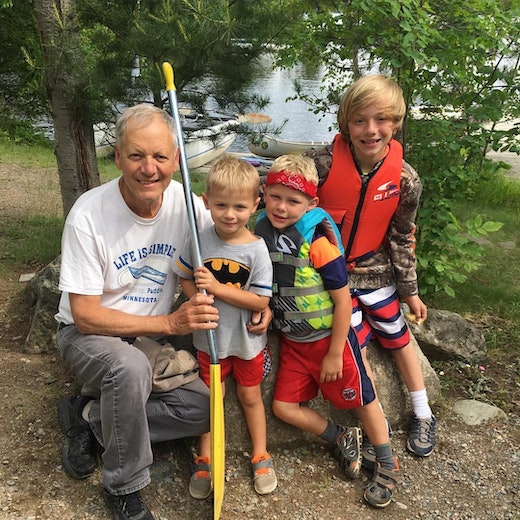 Since the summer of 1984, John Erdmann has continued the family tradition founded in 1951: “Kids grow in ways not possible at home during each summer in the great Northwoods.” John spent two years in the Peace Corps in Venezuela after graduating from DePauw University. He draws on work experience in higher education, the corporate world and business worlds to managing the family’s boys camp. His first of eight grandchildren became a Voyageur camper in 2017. Connect with him on Facebook.